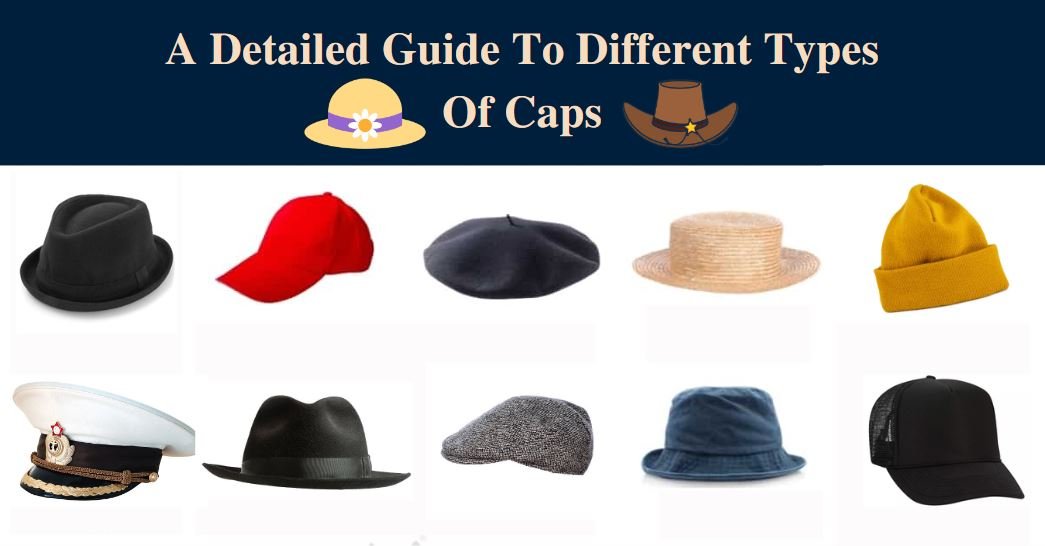 A cap is a sort of headwear that can enhance someone’s appearance. Since ancient times, both men and women have worn hats as fashionable accessories. They were first intended to protect the face and head from the weather conditions. They are now considered fashion necessities. Numerous facts about the wearer’s identity can be gleaned from caps. Materials like cotton, felt, straw, or leather are frequently used to make caps. Size, shape, style, and purpose all differ among them. After reading this post, you can select the best type among the various types to finish your look.

It is one of the most popular caps, especially in the US. Baseball caps have a rounded crown, a stiff panel projecting in front, and are made of soft cotton material. Sports team (baseball team) designs or logos, as well as the brand’s logo, are frequently found on the front of caps. The cap’s back may be fitted to the wearer’s head or equipped with a plastic, Velcro, or elastic adjuster to allow for rapid adjustment to fit different wearers. Both men and women now use it as a fashionable accessory.

Berets are unisex and can be worn in both informal and fashionable settings. These are soft, round, and typically hand-woven or knitted from wool, cotton, acrylic, or other materials. They have a flat crown. It gained popularity after being popularized by the French military at the beginning of the 19th century, and it has since expanded to other nations. It is a trend that keeps gaining popularity and is frequently worn with a variety of attire, from classic to modern. These are also used as uniforms by numerous police and military units around the globe.

Fedoras first became popular in the 1920s, they remain one of the most popular types of caps nowadays. A fedora is a type of cap with an indented crown and a soft brim. At the base of the crown, a silk ribbon in a matching or contrasting color is also attached. Wool, felt, cashmere, cotton, linen, or hemp are typically the materials used to make fedoras. A casual shirt, a pair of pants, and this particular cap are most frequently seen on middle-aged men.

A Trilby cap is a type of hat that is typically manufactured from cotton, wool, straw, and some other materials. Trilby, an 1894 novel, inspired the hat’s name. The trilby cap has a narrow brim. It has a tall, pinched, indented crown. This is a casual cap which is well-liked by people who go to horse races.

A peaked cap is a type of cap that is frequently worn by firefighters, military personnel, and police officers. This cap originated in the 18th century and British soldiers were the first people who wore this cap. Additionally, it goes by the names service cap, garrison hat, flight cap, and field cap. This typically has a 2-3 inch long visor and a brim that is 3-4 inches wide. This hat is also identifiable by its insignia and peculiar flat, sloping crown. Moreover, it includes a cap badge and embroidery.

It originated in the early 1900s. But, it remains in fashion now. An ascot cap is a classic cap with a stiff peak at both the front and sides. It typically comes in a solid color or a plaid design and is usually composed of wool or tweed. Most frequently seen at horse races and other formal events, it is most frequently associated with British culture. Although it is typically worn by men, it can also be worn by women.

It is a knitted cap which is made of wool or cotton. Beanies are frequently worn for fashion or to make the head warm in winter. They can be seen frequently in a variety of colors and with a variety of patterns, including stripes, logos, and slogans. Skullcaps and watch caps are other names for beanies. Since the early 1900s, beanies have been popular. They are frequently seen worn with sportswear or streetwear. The beanie design is distinctive and easy to wear. These are very well liked by millennials and have a considerably more stylish appearance.

This cap is a type of baseball cap, usually manufactured of cotton or polyester. It has a foam brim, a front part, a button on top, and a mesh section at the back that is perforated for breathability. It is also known by the names mesh or netback cap. Additionally, the cap has an adjustable plastic snap at the back to make sure it suits the majority of individuals. On the front, it could include pictures, logos, or other decorative elements. Nowadays, people of all ages and occupations wear trucker caps.

Visor is a cap without a crown and with a stiff front panel. The visor can assist in maintaining the head cool and keeping the sun out of one’s eyes. A breathable material, like mesh or nylon, is often used to create the visor so that it can be worn for extended periods of time without becoming uncomfortable. The visor is attached to the head by a strap that wraps around the back of the head or neck. Usually worn by athletes or individuals taking part in outdoor activities.

The boater cap, often called a skimmer hat, is a summertime headwear that peaked in popularity in the 1800s and 1900s. The cap is far more unique because both the brim and the crown parts are flat in design. This hat is worn with a ribbon around the crown area. Boater caps are a terrific choice for a warm-weather hat that can be worn on the water as well as on most formal occasions because of their timeless style.

It originated in the early 1900s. This is sometimes referred to as a beanie cap or a fishing cap. Bucket caps are quirky, adorable, and fashionable. This cap has a wide, sloppy brim that falls downward and covers the whole forehead area. These are manufactured from heavyweight woven cotton fabric, like denim or canvas. The bucket cap, which used to be worn by farmers and fishermen to protect their heads from the sun, is now a major fashion choice.

Snapback cap is a baseball cap with a flat brim and a plastic strap that can be adjusted at the back. Therefore, it fits for almost everyone. The snapback cap was first made popular in the 1980s by hip-hop, and since then, both men and women have started wearing them as fashionable accessories. It is moreover vibrant, versatile, and inexpensive. Since it comes in a variety of colors and styles, the snapback cap has grown in popularity.

A cap is a type of headwear that is very snugly fitted to the head. It serves as a fashionable accessory as well as a means of providing warmth and protecting the eyes from the sun. Damage to the hair and hair follicles is greatly reduced by wearing a cap. When you purchase the ideal cap for you, keep in mind that it reflects your personality and expresses it to those around you. So why not buy it now? Reviving your fashion is never too late.