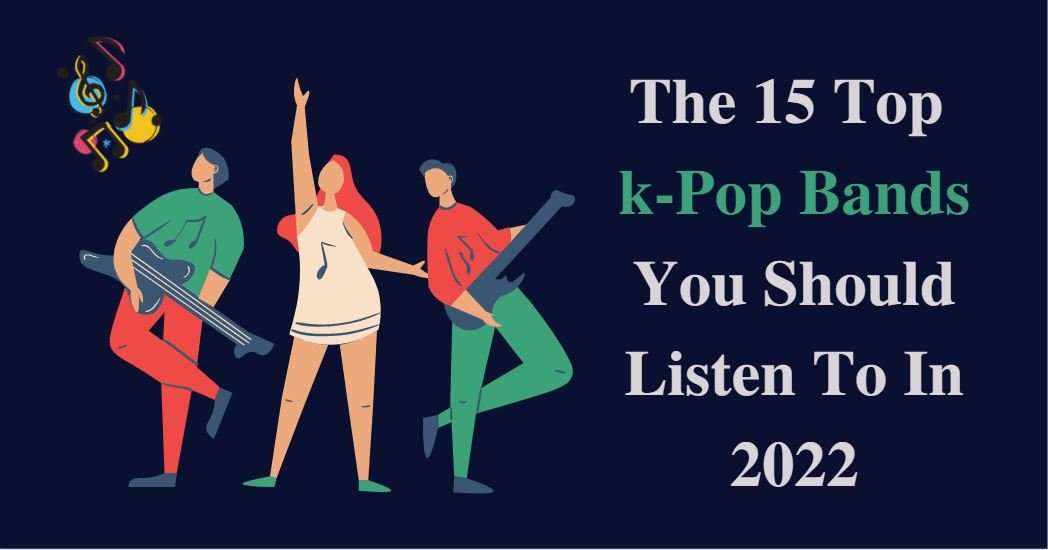 Korean popular music or K-pop is a genre of popular music that originated in South Korea and includes genres such as pop, rock, jazz, hip hop, electronic dance, folk, classical, and others. With their encouraging and uplifting melodies, K-pop bands have captured audiences and built large fan bases throughout time. Fans are drawn to the genre just because of the catchy lyrics, groovy music, excellent  choreography, and incredibly trendy performers. You have likely heard of BTS, Blackpink, and Seventeen, among the most prominent K-pop brands.

Part of its success can be attributed to ‘Hallyu,’ or the Korean wave, which popularized everything South Korean across Asian countries and later the rest of the world. We’ve put up a list of the top K-pop groups right now in this article. Thus, if you enjoy listening to music, you should definitely give these bands a chance. Let’s have a look.

BTS started in 2013 and has since grown to become one of the most successful and popular boy bands. BTS is the first K-pop group to win a Billboard Music Award, and as of 2022, they are the most popular K-pop brand. Bantan Boys and Beyond the Scene are two more names for this group. The Guinness World Records Hall of Fame inducted the South Korean boy group in 2021. BTS has so far broken 23 Guinness World Records, including being the most followed music band on Instagram and the most streamed band on Spotify. BTS members Jin, Suga, J-Hope, RM, Jimin, V, and Jungkook are also unique among K-pop boy bands in that they produce and create their own music. Their hip-hop-influenced dance-oriented K-pop sets them apart from others.

Big Bang debuted in 2016 and quickly established itself as one of the world’s most successful and popular boy bands. Big Bang is most recognised for combining Kpop and hip-hop in a unique way. Aside from music, BIG BANG’s fashion choices have influenced numerous people. Nearly every single song they released was a hit, and BIG BANG is widely regarded as the group that established KPOP as a global phenomenon. They have won many wins at the MTV Video Music Awards in Japan and the Mnet Music Festival in South Korea.

SuperM is the newest K-pop supergroup, bringing together some of the genre’s most well-known performers. SM Entertainment and Capitol Music Group formed the Korean band SuperM in 2019. The group is made up of 7 members from four SM Entertainment boy groups: Taemin from Shinee, Baekhyun and Kai from Exo, Taeyong and Mark from NCT 127 and Ten and Lucas from WayV. SuperM debuted at No. 1 on the US Billboard 200 in 2019 with their self-titled EP, bringing them the first Asian performer to do so with a debut release.

JYP Entertainment formed the South Korean boy band Got7. GOT7 is a South Korean all-boy K-pop band that is incredibly popular around the world. Jay B, Mark, Jackson, Jinyoung, Youngjae, BamBam, and Yugyeom are among the seven members of the group. The group debuted in January 2014 and quickly gained popularity for its choreography, which frequently incorporates aspects of martial arts and street dancing. If you do, Eclipse, Just Right, A, Lullaby, and other songs are among their best-known. Their chemistry is what makes them so endearing.

Seventeen is a 13-member South Korean boy band that is one of the most popular in K-Pop. They are divided into three sub-units, each of which performs hip-hop, vocals, or entertainment, depending on their speciality. S.Coups, Jeonghan, Joshua, Jun, Hoshi, Wonwoo, Woozi, DK, Mingyu, The8, Seungkwan, Vernon, and Dino are among the 13 members. Pledis Entertainment formed the group in 2015. In January 2019, Seventeen released their sixth EP You Made My Dawn, which includes the song Home, which is regarded as one of their greatest.

S.M. Entertainment has backed Girls’ Generation, an eight-member girl group. With the release of “Gee” in 2009, Girls’ Generation has achieved enormous fame since their debut in 2007. Girls’ Generation is one of the most popular K-pop girl groups, having sold over 100 million digital and physical records. Taeyeon, Sunny, Tiffany, Hyoyeon, Yuri, Sooyoung, Yoona, and Seohyun are the eight members of the group. They were inducted into the Guinness World Records in 2018 after winning 13 trophies at the MelOn Music Awards, making them the show’s most award-winning artists. Members of the band have gone on to become prominent DJs, actresses, and hosts a variety of shows.

Blackpink is a popular all-girl K-pop group that debuted in August 2016. Jisoo, Jennie, Rosé, and Lisa are among those that make up this group. This belongs to YG Entertainment’s latest band, and its music suits the tastes of various K-Pop listeners thanks to their EDM, catchy Hip-hop, and R&B styles. Blackpink’s music is also a visual treat, with glamorous costumes, perfect choreography, and innovative concepts. When their single Ddu-Du Ddu-Du was streamed over a billion times on YouTube in November2019, they became the first K-pop band to join the ‘billion views club.’ This is the best-selling K-pop girl band of any and all time, having sold over one million copies worldwide.

Monsta X is a K-pop boy band that originated from Starship Entertainment’s reality survival show No.Mercy. Minhyuk, Shownu, Wonho, Hyungwon, Kihyun, Joohoney, and I.M. are the seven members of the band. Former group member Wonho announced his departure from the group in October 2019. This boy group has been nominated for various national and international accolades since their debut in 2015. Trespass, their first EP, was a smash hit across the country. This group illustrates their allure, which draws people of all ages. The Clan, their first full-length studio album, has landed them a spot on Billboard’s World Albums chart in the United States.

EXO debuted in 2012 as a two-unit group, EXO-K (in Korea) and EXO-M (in China). Xiumin, Suho, Lay, Baekhyun, Chen, Chanyeol, D.O., Kai, and Sehun are members of Exo, a South Korean boy band of nine members. EXO also has a distinct fan base due to the fact that its members are from both South Korea and China. As a result, their music caters to both the Korean and Mandarin markets. Following the success of their smash hit single “Growl”, EXO continued to enjoy remarkable success in album sales and became well known across Asia.

Twice is one of the most captivating South Korean bands to see due to their melodious tunes and integration of various styles. Sana, Jihyo, Mina, Nayeon, Jeongyeon, Momo, Dahyun, Chaeyoung, and Tzuyu are the nine members of the South Korean all-girl group, who debuted in 2015. This group had seven members when it was formed from a survival reality show called Sixteen. Later, Tzuyu and Momo entered. With their single “Cheer Up,” they became well-known, winning awards such as Song of the Year and Best Performing Single. They held their first concert in 2017 and continued to gain popularity when their follow-up albums were released. Twice’s video “Breakthrough” reached 100 million views in May 2021, becoming the girl group with one of the most music videos to reach that milestone.

Stray Kids is a South Korean boy group which is under JYP Entertainment. Bang Chan, Lee Know, Changbin, Hyunjin, Han, Felix, Seungmin, and I.N. are the members of the group, which consists of eight members. Stray Kids was formed through the same-name survival show, stray kids, and the South Korean boy group debuted on March 25, 2018. K-pop, hip hop, and electronica are the most common genres found in Stray Kids’ tracks.

This all-female band formed in 2007. The Wonder Girls were known as “South Korea’s Retro Queens” because of their songs influenced by the 1960s, 1970s, and 1980s. They performed for ten years, from 2007 to 2017. Their most well-known song is likely the 2008 smash single Nobody, which helped them attain worldwide recognition. Wonder Girls have also made a real effort to cater to Chinese and Japanese audiences in order to bring in even more listeners. This band topped the Korean music charts with their trademark dancing and catchy tune.

Super Junior was formed in 2005 with a total of 13 members. The band now has only 9 members after 16 years. During the 2nd generation of KPOP, Super Junior not only earned a name for themselves with numerous successful songs, but they also contributed to the global expansion of the Korean Wave. Super Junior, which has a member count that fluctuates between twelve and thirteen, periodically breaks out into smaller subgroups to create music for different audiences. Super Junior -K.R.Y, Super Junior -T, Super Junior -M, Super Junior -H, and Super Junior-D&E were the five subgroups. They are best known for their 2009 single “Sorry, Sorry,” the lead track off their critically acclaimed album of the same name. They are one of the top all-boy K-pop groups.

SM Entertainment formed Red Velvet, a five-member South Korean girl group. They debuted in August 2014 as a four-member group before expanding to five members in 2015. Their names are Wendy, Irene, Seulgi, Joy, and Yeri. They’re renowned for their catchy music with a sensual, vibrant, and sophisticated vibes. They’ve also won countless prestigious music awards in Korea. For the past few years, the group continually surprised their fans with fresh sounds, concepts, and English versions of their songs.

NCT is a K-pop boy band that stands for “Neo Culture Technology.” NCT is divided into four subunits: NCT U, NCT127, NCT Dream, and WayV. The name NCT 127 comes from the number 127, which is the longitude coordinate for Seoul. NCT 127 made their debut with the single “Firetruck” in July 2016. Neo Zone, the first top-five entry on the US Billboard 200 chart, was released in 2020. NCT 127 went to number three on the US Billboard 200 chart with the release of their full-length album Sticker, making it the top K-Pop album by a boy group in 2021.